US Post Offices was created by Cameron Blevins and Richard Helbock. It is a spatial-historical dataset containing records for 166,140 post offices that operated in the United States between 1639 and 2000. The following is a data biography detailing how the dataset was created and and how it should be used.

Who made the data and why was it created?

Richard W. Helbock (1938-2011) collected the historical data for US Post Offices. Cameron Blevins discovered his work after Helbock had already passed away, Helbock’s research was directly responsible for the resulting dataset. In order to give him proper attribution, Blevins has included him posthumously as a co-creator. A geography professor, Helbock was also postal historian and leader in the philatelic community, including founding the journal La Posta: A Journal of American Postal History in 1969. Helbock spent decades researching the history of the US postal system. This culminated between 1998-2007, during which he published the eight-volume series United States Post Offices, which in his words was “the first attempt to publish a complete listing of all the United States post offices which have ever operated in the nation.” Each volume covered a different region of the United States, and listed information about thousands of individual post offices from that region including their name, county, state, and years of operation.

In addition to the eight printed volumes of United States Post Offices, Helbock produced a Microsoft Access Database of his research to accompany them that was sold on a CD-ROM. This was one of the key decisions that would eventually allow for his work to become US Post Offices. The second decision that made this possible came from his wife, Catherine Clark. After Helbock passed away in 2011, Clark took over many aspects of her late husband’s work - including continuing to make Helbock’s dataset available for purchase online. US Post Offices would never have been created without her contributions.

The primary motivation behind Helbock’s creation of United States Post Offices was for the purposes of philately, or stamp collecting. His volumes were designed as reference books to meet the needs of stamp collectors who could use them to help determine the scarcity (and therefore approximate value) of a postmark from any particular post office. However, Helbock was also keenly interested in the history of the postal system more broadly, which also informed his research.

Cameron Blevins completed the data processing necessary to turn Helbock’s research into a historical-spatial dataset. In 2013, Blevins was a PhD student at Stanford University doing research for his dissertation. After spending months transcribing post office records by hand, he discovered Helbock’s dataset online and purchased the CD-ROM from Catherine Clark. He began working on a geocoding process to try and turn Helbock’s historical data into spatial data, an early version of which he used to complete his dissertation. He continued to refine the geocoding process, eventually arriving at the steps described in more detail in the US Post Offices Github repository.

The primary motivation for Blevins to create US Post Offices was for academic research. In particular, he developed the dataset in order to analyze the history of the western postal system in the late 1800s. He released the dataset in 2021 to coincide with the publication of his book, Paper Trails: The US Post and the Making of the American West.

What’s in the data? 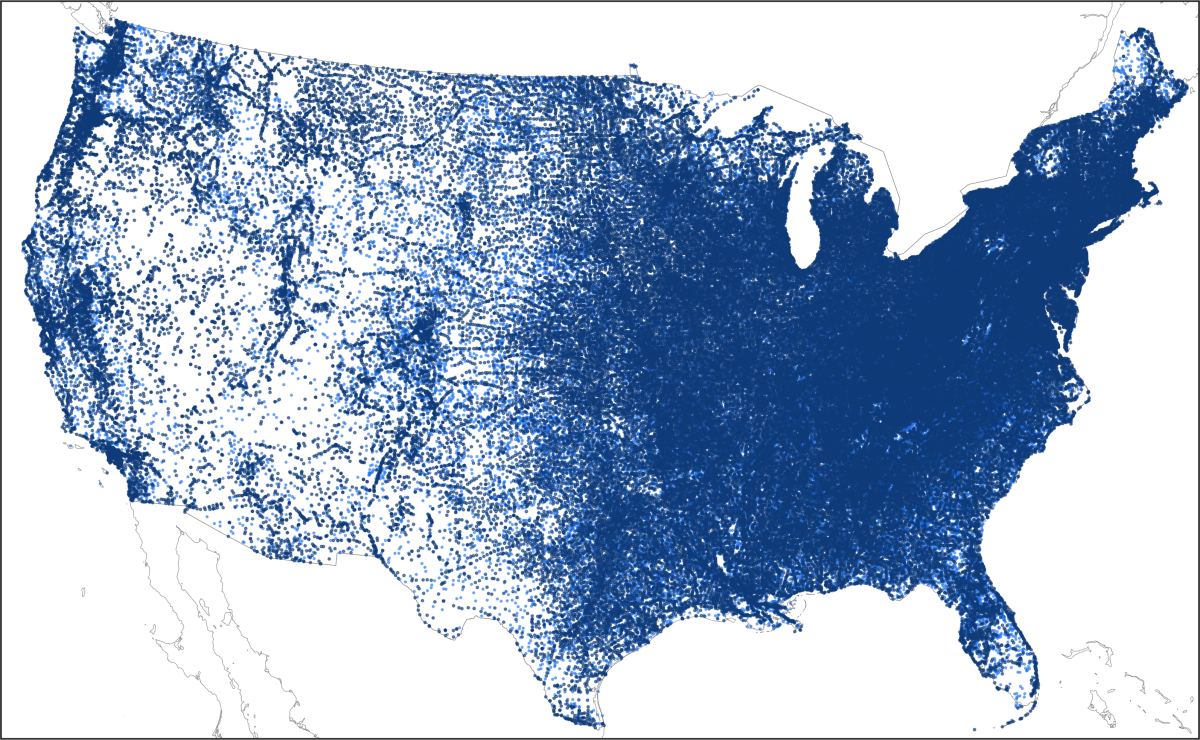 Records from `US Post Offices` in the contiguous United States. Darker points represent exact locations and lighter points are randomly located within their surrounding county.

How was the data created?

The creation of US Post Offices can be broken into two stages: archival research compiled by Richard Helbock and data processing by Cameron Blevins.

Richard Helbock created a dataset of post offices over several decades of archival research from the 1970s to the early 2000s. The main source for this information was the US Post Office Department’s Records of Appointments of Postmasters, in which the Department recorded information about postmaster appointments at the nation’s post offices. 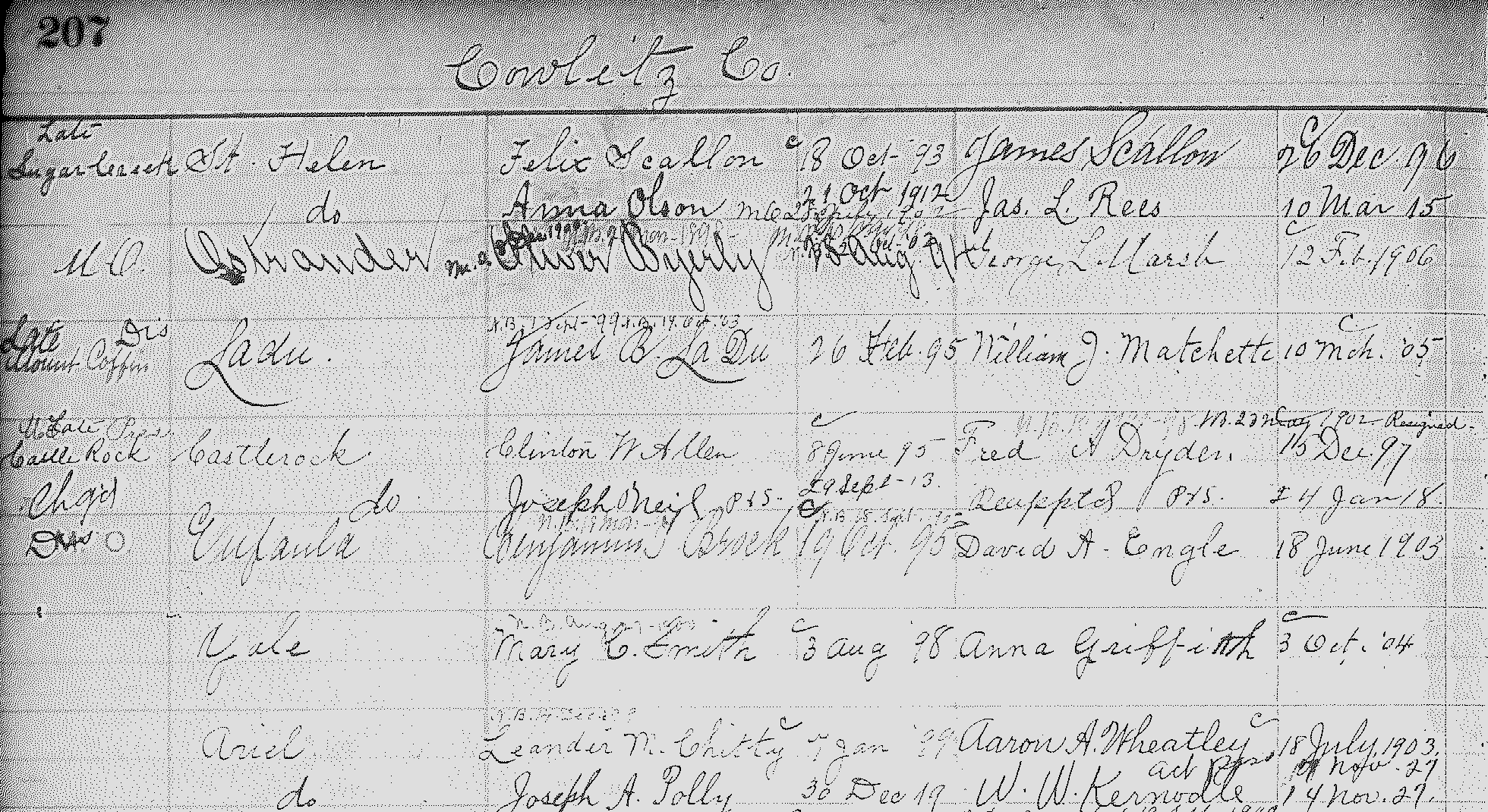 Helbock also consulted many other kinds of sources, including lists and collections of post offices created by other philatelists and postal historians. The major challenge he faced in compiling his dataset was to decide what, exactly, constituted a single record for an individual “independent post office.” As he noted, what should he do if a post office changed names from “Hillsborough” to “Hillsboro”? Should he leave this as a single post office with the new name, or create two separate records? What if that post office changed locations, or closed for a few years and then re-opened? Helbock helpfully provided documentation about the decisions he made when collecting and recording information in the introductions to his eight volumes. Many of these decisions revolved around the nature of historical post offices prior to the early 20th century, when they were much more fluid entities than they are today.

Richard Helbock’s dataset contained a wealth of historical information. To turn it into a spatial dataset, it needed to go through a process of geocoding, or assigning geographical coordinates to each individual post office. Cameron Blevins refined this geocoding process between 2014-2021. A short summary of this process is below. A longer and more detailed description along with the code used by Blevins can be found in the US Post Offices Github repository.

Blevins used a historical gazetteer approach based on the Geographic Names Information System (GNIS) Domestic Names database collected by the U.S. Board on Geographic Names, under the U.S. Geological Survey. Blevins wrote a series of scripts in R that attempted to take the name, county, and state of a post office and look for a corresponding match in the GNIS dataset to find its geographical coordinates. Blevins’s GNIS geocoding process found geographical coordinates for 112,521 out of 166,140 post offices (67.73% of all the records). These coordinates can be found in the file: us-post-offices.csv.

Is it better to have a map with some missing data or a map with some inaccurate data? This question led Cameron Blevins to create an alternative dataset in US Post Offices for visualization and illustrative purposes: us-post-offices-random-coords.csv. This includes semi-random geographical coordinates assigned to post offices that had not been geocoded using the GNIS database. This was made possible by the fact that Richard Helbock recorded information about the state and county of a post office. Even if we don’t know its exact location, we know the post office fell somewhere within a particular county’s borders. Blevins used county boundary shapefiles to generate a set of randomly distributed points within the borders of every county in the United States and then randomly paired those coordinates with post offices located within that county that had not been matched to a GNIS record. Although the specific locations of these post offices are incorrect, the potential error is constrained to a post office’s surrounding county - ie. a post office in Florida is not going to be located in Vermont, and a post office outside Los Angeles is not going to be placed near San Francisco. A longer and more detailed description of this process can be found in the README file for the US Post Offices Github repository.

How should I use this data?

Understand the geocoding process and its limitations. 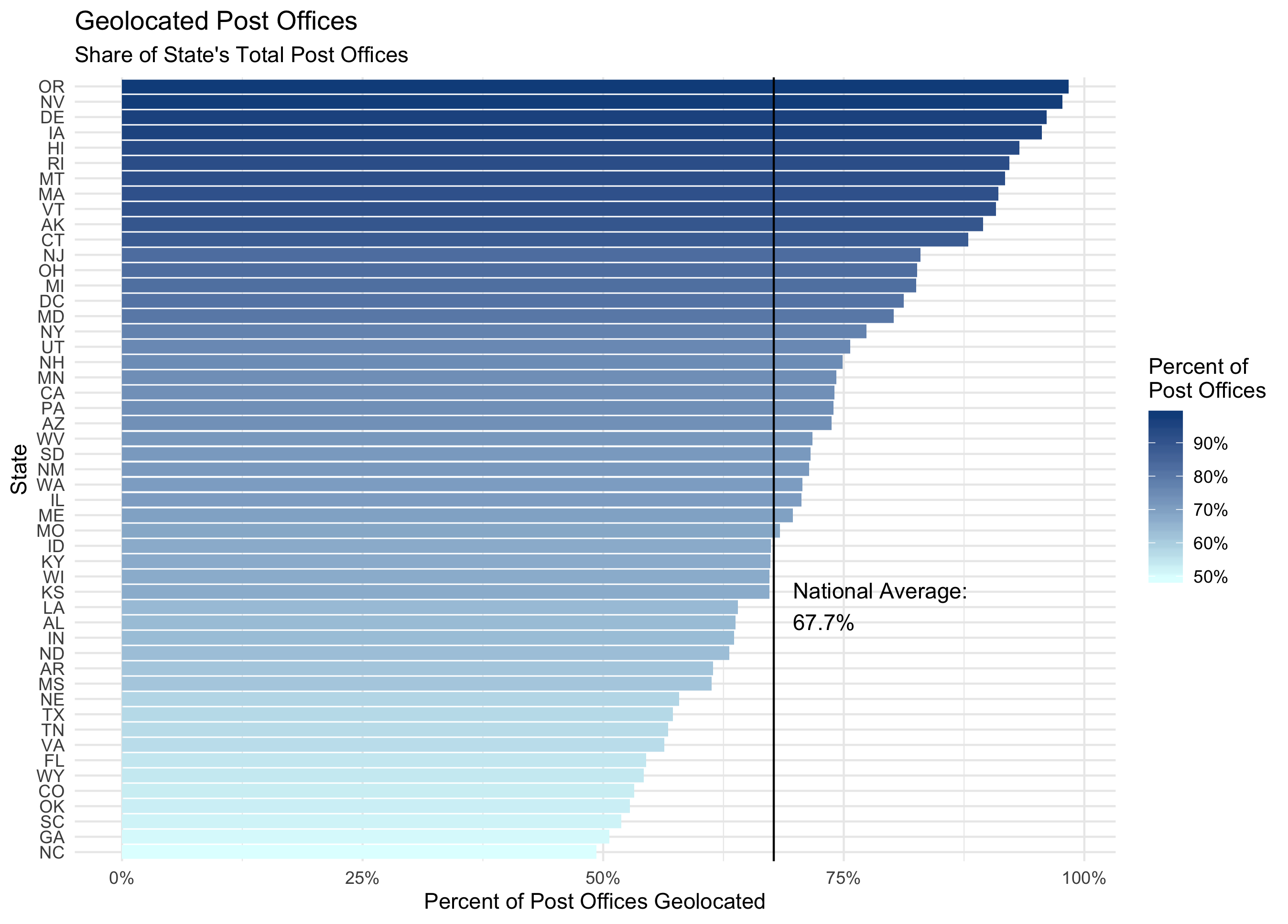 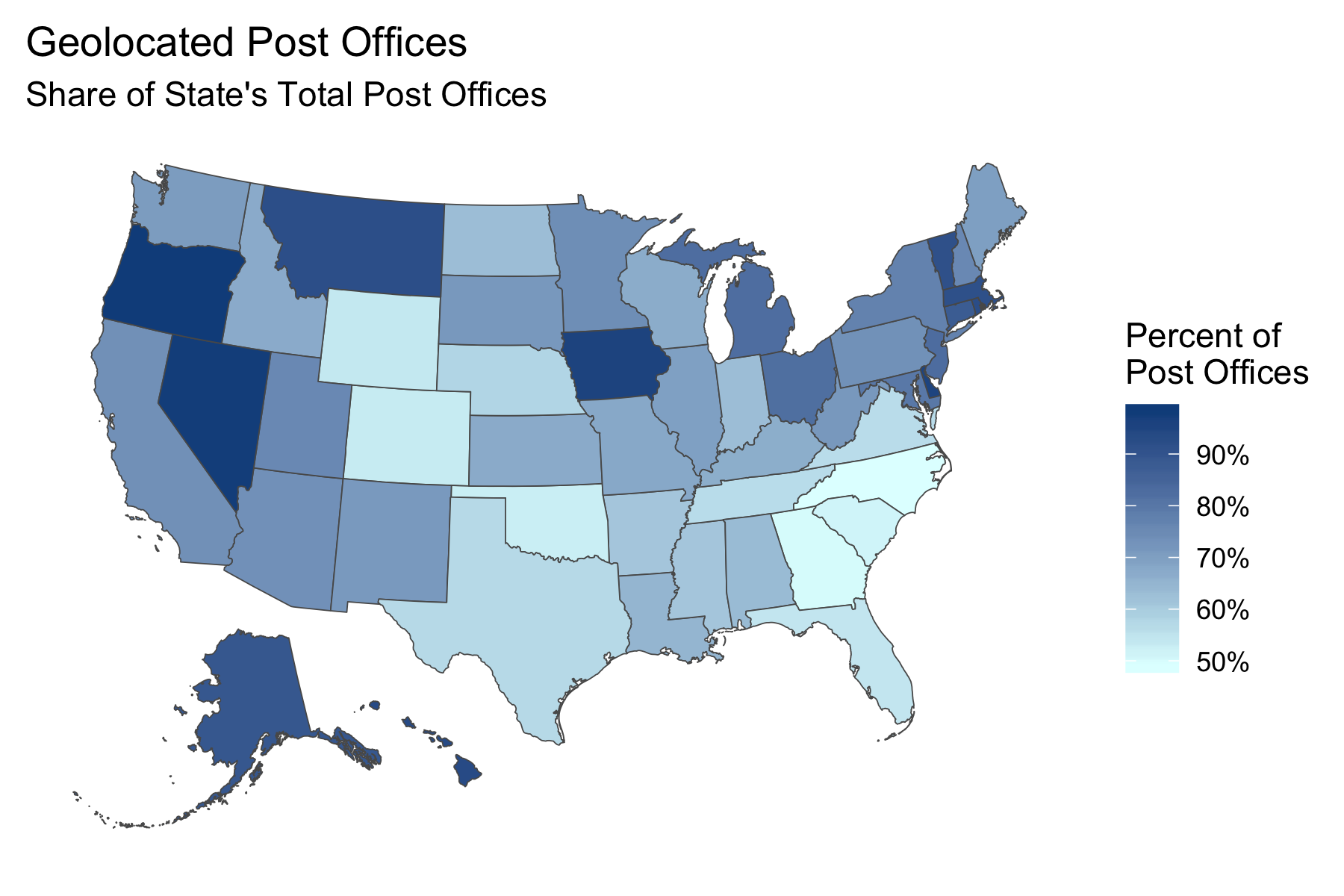 Decide which data file to use.

Remember that post offices are not a direct proxy for population.

This map shows the relationship between Native land, government reservations, and postal expansion.

Where do I access the data and how is it stored?

How should I cite the data?

If you use the dataset, please cite the Harvard Dataverse record:

How has this data been used?